The Most Blessed TIKHON (Mollard)

Archbishop of Washington, Metropolitan of All America and Canada

Locum Tenens of New England and the Albanian Archdiocese 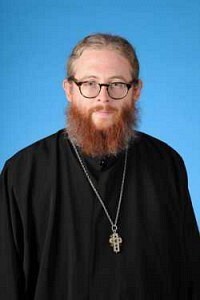 Fr. Mark Doku was born and raised in Worcester, MA where St. Mary's was his home parish.  He graduated from Worcester State College (BS in Clinical Psychology) in 1992.  After graduating, he worked for the Seven Hills Foundation in Worcester as a job coach for adults with disabilities and significant life challenges.  After this, he worked at Worcester State Hosptial in a program designed to treat troubled adolescent boys.  In May 1998, he graduated from St. Vladimir's Orthodox Theological Seminary (M.Div) and that Summer, travelled extensively throughout the country with the seminary's Octet visiting over 70 parishes where they sang the responses for the divine services and presented numerous liturgical concerts.  He was ordained to the diaconate in 1999 and was attached to St. Mary's in Worcester.  In 2004, he was ordained a priest and attached to St. George Albanian Orthodox Cathedral in Boston and served as a supply priest for the Archdiocese.  During this time, he maintained secular employment as a retail pricing analyst for Staples, Inc and subsequently, as the Property Manager for Illyrian Garden Apartments; a 72 unit subsidized housing complex located directly behind St. Mary's.  In December of 2021, he was installed as rector of St. Mary's.  He currently resides in Leicester, MA with his wife Colleen and their two daugters, Paige and Abby.